Looking for The Wizard of Oz

We interrupt this program to bring you a special announcement. The book cover for The Mom Who Took Off On Her Motorcycle arrived! And in another proof that the universe operates with synchronicity, I am presenting it today, which is the third anniversary of the very day that I took off on my motorcycle for Alaska with my husband, Jonny, on his motorcycle. Summer Solstice, 2009.

So this is an anniversary celebration in honor of my best chapter that began the moment I decided to do something extremely different from what I usually do. I wanted to talk a little about my decision to print the book on my own.

I had a literary agent at one of the biggest, most successful agencies in New York. She was sure that she’d be able to sell the book for me. (She wouldn’t have invested so much of her time if she didn’t think she could make money.) We worked on it together for a few months and then she sent it out to well-respected editors at a dozen houses.

Editors all replied that the premise was intriguing and the writing was great but for one reason or another, they couldn’t make an offer. So I rewrote the whole book, making it even stronger than the first time around. The response was the same: in this publishing environment, editors couldn’t take it on. One editor said she just didn’t understand why I’d do something so dangerous; another editor said she remembered her Mom going through a similar “empty nest” crisis. An editor at a small publishing house was about to make an offer when my agent quit the agency (she moved to a big-name publishing house) and there were publishing upheavals…

So there I was. I really wanted to publish this book with one of the traditional publishing houses. But part of my whole spiel here on this blog is accepting life on life’s terms. I could have either complained about the publishing industry or change what I could. My choice: get bitter or get better.

Back in January, I was going to rush and publish this book for Mother’s Day but my friend Lily (I’ve written about here on my blog) said I should take my time and find out how other people self-print. So I investigated and stumbled upon Catherine Ryan Howard’s blog here. If Diana was Britain’s Princess of Wales, Catherine is Ireland’s Princess of Self-Printing Sales. Her blog is filled with practical suggestions, including go-to names. I found top-notch editor Sarah E. Franklin, (you can twitter her at @SarahEFranklin) who I eventually worked with, and Andrew Brown who designed this winning, wondrous cover for me. Here’s his link. (Go visit there but don’t forget to come back!) He never lost his patience even though I wasn’t sure what I wanted until, like in Malcolm Gladwell’s essay, “Blink,” I knew right away. The cover would make me want to buy this book and I’m my first reader.

I will be filling you in on all the upcoming details about The Mom Who Took Off On Her Motorcycle interspersed with our regularly scheduled posts on how you can become the hero of your own life and start your best chapter today. In fact, right now. I’m taking a couple of deep breaths to remind myself that I’m still breathing. Alive.

Too often we wait for an outsider, usually a stranger, to give us the validation we think we need. While waiting for an acceptance, what I was really waiting for was the booming voice of the Wizard of Oz to tell me, yes, it is official, you are a writer. But then I realized that the wizard behind the curtain is another bumbling, searching, insecure human like the rest of us. We have to learn to validate ourselves. Self-printing this book, then, is a continuation of what I started to learn on my way to Alaska.

Plus, the whole world of self-publishing is changing. Gone (for the most part) is the stigma. Many established writers such as James Altucher refuse to publish via companies. Do you have any project you’re not doing because you’re waiting for someone to give you the stamp of approval? Are you considering self-publishing? Here are a couple of great links to sites that will steer you in the right direction:

Sorry, I can’t help myself. One last time: 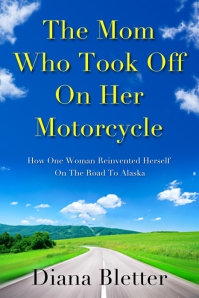 Diana Bletter is the author of several books, including The Invisible Thread: A Portrait of Jewish American Women (with photographs by Lori Grinker), shortlisted for a National Jewish Book Award. Her novel, A Remarkable Kindness, (HarperCollins) was published in 2015. She is the First Prize Winner of Moment Magazine's 2019 Fiction Contest. Her work has appeared in The New York Times, The Wall Street Journal, Commentary, tabletmag, Glamour, The Forward, The North American Review, Times of Israel, and is a reporter for Israel21C, and many other publications. She is author of Big Up Yourself: It's About Time You Like Being You and The Mom Who Took off On Her Motorcycle, a memoir of her 10,000-mile motorcycle trip to Alaska and back to New York. She lives in a small beach village in Western Galilee, Israel, with her husband and family. She is a member of the local hevra kadisha, the burial circle, and a Muslim-Jewish-Christian-Druze women's group in the nearby town of Akko. And, she likes snowboarding and climbing trees.
View all posts by dianabletter →
This entry was posted in Being a Hero In Your Life, Lily and her stories, self-printing and tagged Alaska, Blink, Book cover, Dorothy Gale, Malcolm Gladwell, motorcycle, New York City, publishing, Wizard of Oz. Bookmark the permalink.

5 Responses to Looking for The Wizard of Oz