Posted on September 19, 2012 by dianabletter 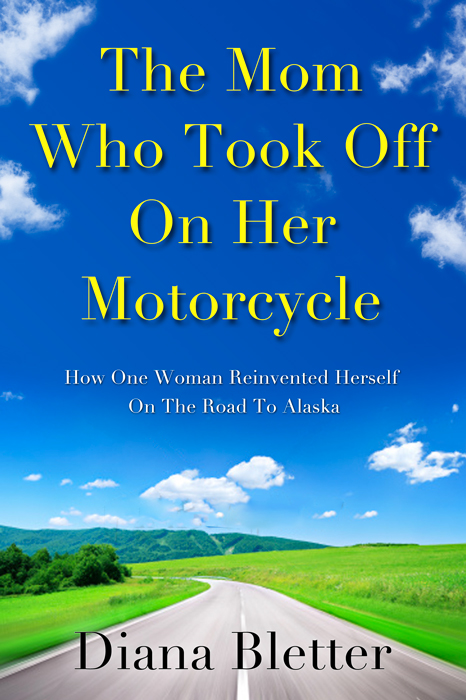 My Cover, My Shelf (As in Book Shelf)

I’m all set to launch THE MOM WHO TOOK OFF ON HER MOTORCYCLE! I even made a cute little movie which I haven’t yet uploaded to youtube.com about the Mom Who Took Off’s important tips for raising kids. (Like, make sure you have a job chart so that your kids help around the house. You be the Mom, not the slave!)

“Call your book Ten Thousand Miles,” he said. “On The Road To The Great White North.”

Being an insecure mamby-pamby gotta-get-your-approval don’t-got-no-balls kinda person, I immediately said, Eureka! He’s right. And marketing-wise, I thought the book would have stronger appeal to a wider audience. Generic not specific. Appeal to the broad market not just the broad market. (Calling women broads  suggested immorality or coarse, low-class women, which was why with the rise of women’s athletics, the track and field broad jump was changed to the long jump in 1967.) That was an aside, or getting off the subject, my mind wandering. But don’t you love etymology?

OK. My book is about how I took off on my motorcycle with my husband, Jonny, on his motorcycle because I was facing an empty nest after my 4+2+1 kids (biological+step+semi-adopted) were leaving the house and Jonny was checking off items on his bucket list. And how I came back ready to make the next chapter (tie-in here to this blog!) the best chapter of my life.

Maybe Harrison was right, I thought. When my literary agent at Trident Media Group had sent the book around, one editor wrote in her rejection slip in a tone that I could hear her gasping, “Why would the writer do something so dangerous?” The book’s title implied that I was a bad Mom taking off…So perhaps my title was all wrong.

I had the book already planned, however. The cover is by wonderful Andrew Brown. (You can contact him here.) I thought it would be a bit more of an expense to change the cover to my new title and asked Andrew. He wrote back, “I would advise that you consider retaining your original title. Targeting is important and there is always a risk people lose their audience by trying to appeal too broadly. Clearly however the final decision needs to be one you are comfortable with.” If you want to learn more about what I told Andrew and how he works on cover designs can be found here on Steven Lewis’ blog.

Then I spoke to my friend Lily about this. She is a big shot in marketing at a fancy Swiss cosmetics company but I’m not allowed to write its name. “People work on marketing and thinking up one word for years,” Lily said. “Some books or products have very odd names and do great (Zen and the Art of Motorcycle Maintenance); some have very generic names and do great (Cheryl Strayed’s Wild). The answer is that there is no right or wrong—it’s what you feel good with.”

“Well, The Mom Who Took Off On Her Motorcycle really reflects who you are,” she said. “It has your sense of humor and seems more you than Ten Thousand Miles. Maybe you need a good tag-line, like ‘Getting Away is Almost as Good as Getting Back Home’.”

My tag line now is “How One Woman Reinvented Herself on the Road to Alaska” because I thought it would appeal to all those folks who are fascinated with Alaska. And reinvention. Transformation! Becoming someone new! Starting life over again! But now I’m not sure about that. I’m keeping THE MOM WHO…because it makes me smile each time I see it. And because when I tell people, they also smile.

Any suggestions for a good tag-line? I’m thinking that all mothers need a break. That’s actually the new idea behind marketing wines directly to women which was written about in The New York Times the way beers were aimed at guys. Instead of drinking wine, however, you can read my book and dream of getting away for a while. A Time-Out for Moms.

And I want to avoid some of the mistakes that some indie writers make which Shannon of Duolit (they have wonderful suggestions for indie-publishing here, everything from making your own book trailers to the traits of successful self-published writers) spoke about on Catherine Ryan Howard’s blog:

So…I’m putting it out there. Any ideas on specific versus generic? What is your favorite book title? What works for you and why?

And what does this have to do with living your best chapter? Because one of my rules is: Isolation = desperation. We don’t need to do it all alone. We can be gigantically courageous and ask for help. Just put it out to the universe.

Here’s a woman doing the long jump, not the broad jump. We gotta jump right in!

Diana Bletter is the author of several books, including The Invisible Thread: A Portrait of Jewish American Women (with photographs by Lori Grinker), shortlisted for a National Jewish Book Award. Her novel, A Remarkable Kindness, (HarperCollins) was published in 2015. She is the First Prize Winner of Moment Magazine's 2019 Fiction Contest. Her work has appeared in The New York Times, The Wall Street Journal, Commentary, tabletmag, Glamour, The Forward, The North American Review, Times of Israel, and is a reporter for Israel21C, and many other publications. She is author of Big Up Yourself: It's About Time You Like Being You and The Mom Who Took off On Her Motorcycle, a memoir of her 10,000-mile motorcycle trip to Alaska and back to New York. She lives in a small beach village in Western Galilee, Israel, with her husband and family. She is a member of the local hevra kadisha, the burial circle, and a Muslim-Jewish-Christian-Druze women's group in the nearby town of Akko. And, she likes snowboarding and climbing trees.
View all posts by dianabletter →
This entry was posted in How to Change Your Life, Writers, Writing, Your Best Chapter and tagged Alaska, book marketing, independent publishing, indie publishing, motorcycle, motorcycling, New York Times, self-publishing, Steven Lewis, wine, women, writing, Zen and the Art of Motorcycle Maintenance. Bookmark the permalink.

5 Responses to Specific Versus Generic: Marketing Your Best Chapters