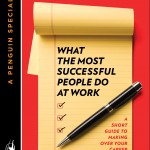 I’m a big fan of Laura Vanderkam, and her latest book, What the Most Successful People Do at Work, continues to nudge me (in totally supportive ways) that I can get more tick for my tock. That’s the equivalent of more bang for my buck, which was a theme she emphasized in All the Money in the World. (See my interview with Vanderkam here.) In her newest book, Vanderkam offers practical suggestions on how to recast the way I think of my work week, reframing my sense of time. Here’s one solid idea:

“Even if you think you lack complete control of your time, and even if you feel battered by the gales of creative destruction swirling through the economy, you can look at your calendar and see the possibilities inherent in minutes rather than seeing them as sands sifting through an hourglass.”

I like the way Vanderkam shares her own To Do Lists, focusing less on general ideas and more on specifics. For example, she makes it a priority every Sunday night to make a priority list of what she plans to accomplish in the next week.

She also emphasizes one of my favorite suggestions about how to make this chapter the best chapter: Take little steps to achieve great goals. She cites Charlene Johnson, the celebrity fitness trainer, who says that she does three things per day in pursuit of a bigger goal.

As Vanderkam puts it, “Doing three things every work day without fail could put you 750 steps closer to your goal in a year.” If your goal is to write a novel approximately 50,000 words (which is the end goal of NaNoWriMo) then you just have to choose a deadline (one month or one year) and break down your daily workload to reach that amount.

The goal of a 10,000 mile journey begins with a single step. And each step done repeatedly adds up before you know it. That concept ties in with Vanderkam’s idea to keep practicing—and to be held accountable. Find a buddy and make a commitment. My friend Lily sometimes calls me in the morning and says, “Today I plan to…” and I share what I plan to do. That way, we’re in it together. Some of my other friends started a running group to get into shape. Before members go out for a run on their own, they contact the group to say they’re tying their sneakers and heading out. Then there are no excuses.

Diana Bletter is the author of The Invisible Thread: A Portrait of Jewish American Women (with photographs by Lori Grinker), shortlisted for a National Jewish Book Award. Her novel, A Remarkable Kindness, (HarperCollins) was published in 2015. She is the First Prize Winner of Moment Magazine's 2019 Fiction Contest. Her work has appeared in The New York Times, The Wall Street Journal, Commentary, tabletmag, Glamour, The Forward, The North American Review, Times of Israel, and is a freelance reporter for The Jerusalem Post, and many other publications. She is author of Big Up Yourself: It's About Time You Like Being You and The Mom Who Took off On Her Motorcycle, a memoir of her 10,000-mile motorcycle trip to Alaska and back to New York. She lives in a small beach village in Western Galilee, Israel, with her husband and family. She is a member of the local hevra kadisha, the burial circle, and a Muslim-Jewish-Christian-Druze women's group in the nearby town of Akko. And, she likes snowboarding and climbing trees.
View all posts by dianabletter →
This entry was posted in How to Change Your Life, Thought For The Day and tagged Charlene Johnson, Goal, Laura Vanderkam, Self-help, Sunday, To Do List, Vanderkam, Working time. Bookmark the permalink.