Three Messages of the Easter/Passover Bunny 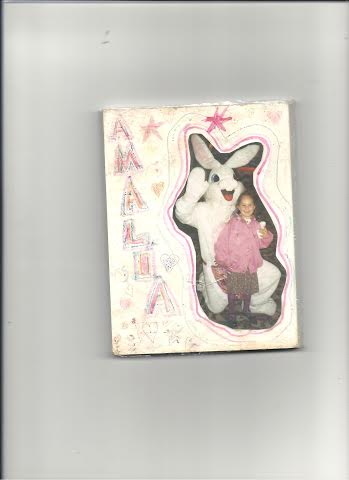 Amalia Singer with the Easter/Passover bunny

I was in New York City with Jonny and our six children right before Easter and Passover a few years ago. Since we were living in Israel, the kids had no idea what Easter was, so when we saw a bunny parading nearby, I said to them, “Look! It’s the Passover bunny!”

The bunny heard me saying that, and told us, “I really am the Passover bunny.”

That’s the famous song Jews sing at the Passover seder, “Dai-enu,” or it would have been enough for us.

What’s the message? First, there are so many paths to feel a sense of joy and holiness and we can respect all of them. Nobody has the whole truth. We just don’t know. But we can practice mutual respect.

We just don’t know. In matters of faith, there is no such thing as right or wrong. We each define God (or however we choose to define God) in our own special ways.

One of my best friends is a devout Catholic. I’m a committed Jew. We have long, inspirational, spiritual, uplifting discussions about Catholicism and Judaism. I esteem her beliefs; she values mine. Unlike in the rest of the world, where there is so much strife and self-righteousness and horrific violence when it comes to differing religions. One only has to read how ISIS has beheaded Christians to know the devastating crimes committed in the name of religion. In using the word “infidel” to apply to anyone whose spiritual ideas differ from their own.

Another thing I’ve come to understand is that we all have a sense of the divine inside us. How we express that is up to us. We can be creative and write, paint, dance or sing. Nobody else has dibs on expressions of grace, of holiness.

So wherever you are right now, whatever you’re doing, remind yourself that you are a channel for the divine here on earth. And I hope you find some way to express yourself while being tolerant of others, to fill your own well, and to appreciate your life. It is the only one you have.

Diana Bletter is the author of The Invisible Thread: A Portrait of Jewish American Women (with photographs by Lori Grinker), shortlisted for a National Jewish Book Award. Her novel, A Remarkable Kindness, (HarperCollins) was published in 2015. She is the First Prize Winner of Moment Magazine's 2019 Fiction Contest. Her work has appeared in The New York Times, The Wall Street Journal, Commentary, tabletmag, Glamour, The Forward, The North American Review, Times of Israel, and is a freelance reporter for The Jerusalem Post, and many other publications. She is author of Big Up Yourself: It's About Time You Like Being You and The Mom Who Took off On Her Motorcycle, a memoir of her 10,000-mile motorcycle trip to Alaska and back to New York. She lives in a small beach village in Western Galilee, Israel, with her husband and family. She is a member of the local hevra kadisha, the burial circle, and a Muslim-Jewish-Christian-Druze women's group in the nearby town of Akko. And, she likes snowboarding and climbing trees.
View all posts by dianabletter →
This entry was posted in Acceptance and tagged acceptance, Christian, Easter, ISIS, Passover, tolerance. Bookmark the permalink.

2 Responses to Three Messages of the Easter/Passover Bunny