Tool For Tuesday: The One Percent Wrong Rule. 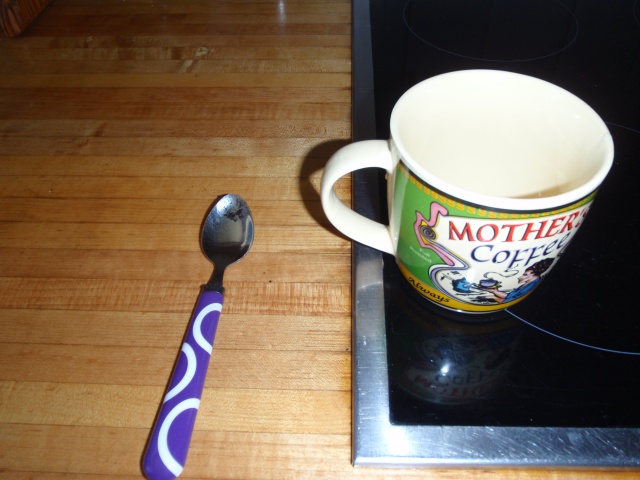 The Case of the Coffee Spoon: The One Percent Wrong Rule.

Oh yeah, I was so right. Totally right about what happened. This guy was wrong and I was right.

Aw…I had to think about it. I had to admit that I might have been one percent wrong. Yes, maybe I was 99 percent right and 1 percent wrong.

So there you have it. I had to own up to that one percent. I still had to make amends for that one percent wrong, even if the other guy was far wronger (is that a word?) than me.

That is the reason there is a photo of the dirty spoon because my husband Jonny kept telling me not to leave my coffee spoon there. I kept saying, “Yeah, yeah, yeah,” and still forgetting to put it away. I realize that I want other people to change–like NOW–but look how hard it is to change myself!

So I need to practice forgiveness…first for myself…and then for others.

Tool For Tuesday: Make this day part of your best chapter by admitting that one percent where you might be in the wrong. Once we keep an open mind about our own behavior, once we practice honesty, we can forgive others–and ourselves. It ain’t so bad being human.

And while we’re not on the subject. If any of you are in these places, I cordially invite you to come to an event.

Books on the Square

Diana Bletter is the author of The Invisible Thread: A Portrait of Jewish American Women (with photographs by Lori Grinker), shortlisted for a National Jewish Book Award. Her novel, A Remarkable Kindness, (HarperCollins) was published in 2015. She is the First Prize Winner of Moment Magazine's 2019 Fiction Contest. Her work has appeared in The New York Times, The Wall Street Journal, Commentary, tabletmag, Glamour, The Forward, The North American Review, Times of Israel, and is a freelance reporter for The Jerusalem Post, and many other publications. She is author of Big Up Yourself: It's About Time You Like Being You and The Mom Who Took off On Her Motorcycle, a memoir of her 10,000-mile motorcycle trip to Alaska and back to New York. She lives in a small beach village in Western Galilee, Israel, with her husband and family. She is a member of the local hevra kadisha, the burial circle, and a Muslim-Jewish-Christian-Druze women's group in the nearby town of Akko. And, she likes snowboarding and climbing trees.
View all posts by dianabletter →
This entry was posted in Acceptance, forgiveness, Tool For Tuesday and tagged acceptance, Forgiveness, Tools. Bookmark the permalink.

5 Responses to Tool For Tuesday: The One Percent Wrong Rule.