Shimon Peres: Never Give Up Hope.

Posted on September 30, 2016 by dianabletter 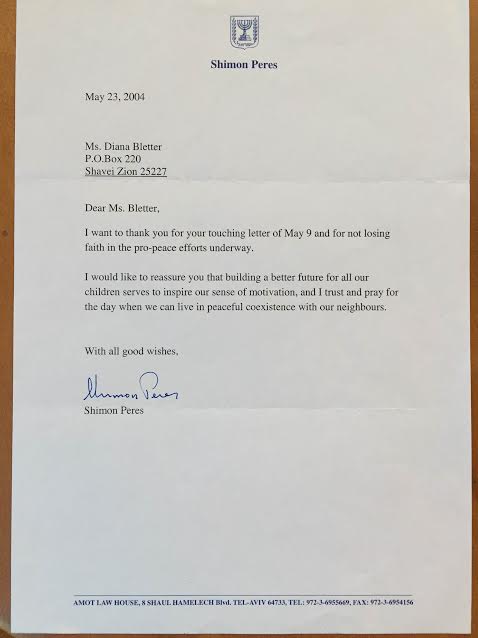 I wrote to the Former Israeli President Shimon Peres–who died Wednesday at the age of 93 and whose funeral was attended by seventy world leaders on Friday morning–when he was a member of the Knesset, the Israeli Parliment, in 2004. I told him how I still hoped for peace despite everything  going on around us in Israel. Peres wrote me the above letter. A while later, I wrote him again, asking how he was able to hold onto his hope and optimism when the future of the world seemed so bleak. He replied: 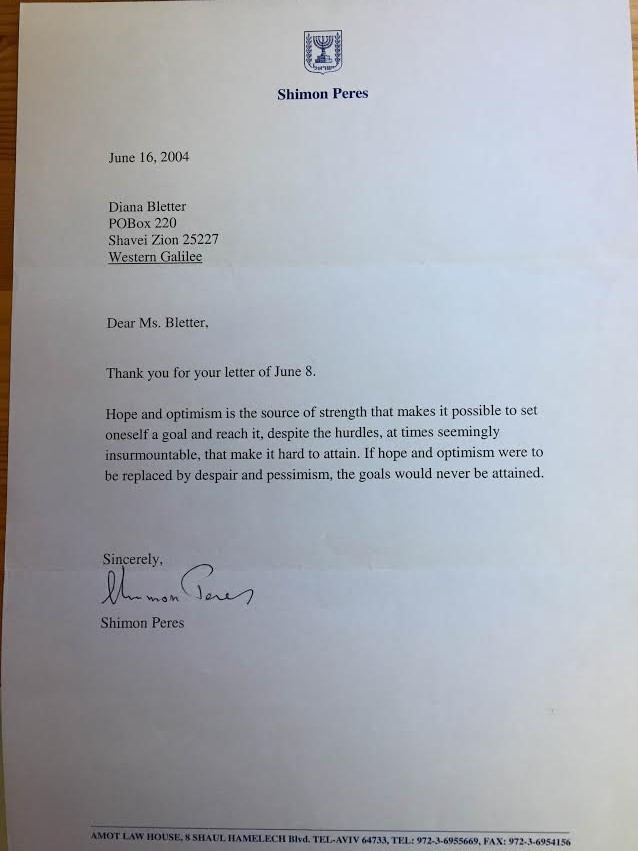 In the book, The Start-Up Nation by Saul Singer, Peres is quoted more than anyone else.

“They called me a dreamer,” Peres said in July as he laid the cornerstone for the Israeli Innovation Center, which will be part of the Peres Peace House in Tel Aviv-Jaffa. “But today, when I look at Israel, we all can see clearly that the greater the dream, the more spectacular the results.”

I have his words in my head whenever I’m faced with a difficult goal. “If hope and optimism were to be replaced by despair and pessimism, the goals would never be attained.”

May the memory of Shimon Peres’ energy and enthusiasm for life continue to inspire us.

“Let us adopt the road to peace and innovation, which will always be better than war and terror,” he said. “…I have one small request – Israel is a dream that came true. Permit me to continue to dream.”

Diana Bletter is the author of several books, including The Invisible Thread: A Portrait of Jewish American Women (with photographs by Lori Grinker), shortlisted for a National Jewish Book Award. Her novel, A Remarkable Kindness, (HarperCollins) was published in 2015. She is the First Prize Winner of Moment Magazine's 2019 Fiction Contest. Her work has appeared in The New York Times, The Wall Street Journal, Commentary, tabletmag, Glamour, The Forward, The North American Review, Times of Israel, and is a reporter for Israel21C, and many other publications. She is author of Big Up Yourself: It's About Time You Like Being You and The Mom Who Took off On Her Motorcycle, a memoir of her 10,000-mile motorcycle trip to Alaska and back to New York. She lives in a small beach village in Western Galilee, Israel, with her husband and family. She is a member of the local hevra kadisha, the burial circle, and a Muslim-Jewish-Christian-Druze women's group in the nearby town of Akko. And, she likes snowboarding and climbing trees.
View all posts by dianabletter →
This entry was posted in miracles, Uncategorized and tagged dream, hope, Israel, optimism, Shimon Peres. Bookmark the permalink.

2 Responses to Shimon Peres: Never Give Up Hope.