Not “Hearing” The Forest For The Trees 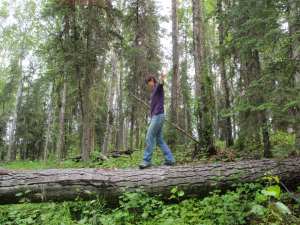 Sometimes we're caught in a forest of our own making

There’s a fascinating article in The New York Times about soldiers who are using new techniques to recover from Post-Traumatic-Stress Disorder. The lessons they learn could apply to us all. Soldiers who were going into villages where children might spit or throw rocks on them were encouraged to zoom in on the positive. For example, they kept their thoughts on villagers who invited them in for bread and chai rather than the negative. This way, soldiers were able to store up good feelings so that they would be strong enough to deal with whatever difficulties they encountered.

What can that teach us? Simple. We have to keep our thoughts focused on what is positive in our lives rather than continually go back to the negative. Which brings me to my friend, Lily, and the subject of today’s blog, “Not ‘Hearing’ the forest for the trees.”

Lily and her boyfriend (new but serious) were planning a trip to Hawaii and he asked her what she planned to contribute to the trip. It was a simple question, right? But it made Lily furious! And when he tried to explain what he meant, she got even more upset and they almost cancelled the trip. What went wrong?

Lily’s memories of her past – her hurts from old relationships, disappointing break-ups, money issues with ex-boyfriends and money issues with cheap ex-boyfriends – got in the way of her actually hearing what Ryan was asking. In other words, she couldn’t hear what Ryan’s question because her past experiences blocked out his words. Just like we sometimes don’t see the forest for the trees, we often hear things through our own brain’s filters.

What was Ryan really asking? He says he wants to marry her. So, rather than looking at the funds for this trip to Hawaii as “her money” and “his money” he wanted to pool their resources together. His real question was: What do you think we should spend “our” money on? For example, what is more important to Lily: paying extra to fly business class, let’s say, or paying extra for a better hotel? Is it more important to her to contribute to dinners at fancier restaurants or to buy clothes?

After Lily calmed down, she realized that he wasn’t repeating the same pattern as her former boyfriends or putting her on the spot. Perhaps he has his own issues about money but that’s a different issue, and then the question is whether or not she can accept his shticks or not. (See my blog post here about changing other people.) His question was reasonable. In future posts, I’ll discuss how money is one of the biggest wedges that drives couples apart. (Making the next chapter sometimes a lonely chapter.) So, just like those soldiers who learn to focus on the hospitable and look for it, we have to focus on the positive and listen for it.

When I first really working on how to make my life better, I discovered the strangest phenomenon. All of a sudden, I could hear music in a more profound way. It was as if I had been blocked from hearing well because so much chatter – fears, doubts, insecurities – was going on in my brain. Once I became calmer inside myself, I unplugged my clogged senses.

These days, when I feel attacked or unsure about what someone is trying to tell me, I try to find myself the space between what I hear and how I respond. Taking a deep breath and pausing for the slightest moment saves me from getting into arguments, from assuming the wrong thing, and from deepening misunderstandings. I make sure that what I hear is really what is being said – and not just what I assume is being said based on my filters.

Have you experienced this sense of not “hearing” the forest for the trees? ”? What have you learned to do to change that?

Diana Bletter is a writer living in Western Galilee. Her work has appeared in The New York Times, The Wall Street Journal, Commentary, tabletmag, Glamour, The Forward, The North American Review, Times of Israel, and many other publications. Her first book, The Invisible Thread: A Portrait of Jewish American Women (with photographs by Lori Grinker) was nominated for a National Jewish Book Award. Her novel, A Remarkable Kindness, (HarperCollins) was published in 2015. She is the First Prize Winner of Family Circle Magazine's 2011 Fiction Contest and author of Big Up Yourself: It's About Time You Like Being You.
View all posts by dianabletter →
This entry was posted in Relationships and tagged assumptions, listening, money, Post Traumatic Stress, soldiers, The New York Times. Bookmark the permalink.