Pope Francis in the Great Synagogue and Guess Who at the Open Door Bookshop in Rome on the Same Day.

Just an hour before I spoke at the Open Door Bookshop in Rome, Pope Francis was speaking at the Grand Synagogue just a few minutes away. It was the third time in modern history that a pope visited the synagogue. Quite incredible. Just to put this in perspective, historian David Kertzer, who wrote The Popes Against the Jews, said that throughout history, the Vatican forced Jews to live in ghettos (the word itself is Italian) and subjected them to forced conversions, expulsions and persecution. And now the Pope said, “Every human being, as a creature of God, is our brother, regardless of his or her origin or religious affiliation.”

The first Pope to visit the synagogue was Pope John Paul II, now a saint, who made his historic visit in 1986. That visit came after the Vatican’s 1965 Nostra Aetate declaration that repudiated the charge that Jews were collectively responsible for killing Jesus, and stressed the religious bond between Jews and Catholics.

The Great Synagogue in Rome is at the heart of the Jewish ghetto. When the Pope spoke at the synagogue (which is breath-taking, lovely and oh-so-inspiring), he said, “From enemies and strangers we have become friends and brothers.”

So what does this have to do with my speech? In my novel, A Remarkable Kindness, I stress the difference between religion and spirituality. Religion divides people; spirituality is what unites us. Religions stress their way is the only way; spirituality is each of us defining our own path to God, however we understand God. Someone once asked Rabbi Abraham Twerski, “What’s the difference between a religious person and a spiritual person?” He replied, “A religious person is scared of going to hell; a spiritual person has already been there.”

Here are a couple of things I learned from giving this talk:

Never let fear stop you from trying to do what you want to do. I was scheduled to give my talk in English but in Rome…do as the Romans do. I thought, perché no? Why not? I lived in Rome for a few months in 1980, working as a freelance journalist. If I could ride a motorcycle after six lessons to Alaska, I could still speak in Italiano. Si? Not really, but I did my best. Everyone was friendly, empathetic, and they all helped me out when I stumbled, which brings me to my second lesson.

Never be ashamed to ask for help.

The Open Door Bookshop is in Trastevere, a special part of Rome that is filled with cobblestone streets and winding passageways. The bookshop — filled from floor to ceiling with used English and Italian books) is located in a building that dates from Medieval times. When Jonny and I decided to go to Rome for our birthday weekend January 16-17, I sent an email to the owners of the shop to inquire whether they’d be interested in my coming to speak. I was delighted to receive a reply from Lavinia and Paola, two sisters who own the shop with their third sister, Sabina. They live up to their name, Open Door, open mind. (And how rare is that these days?)

The Fabulous Sisters, (from left, Paola, me, Sabina & Lavinia Mauriziio)

Always, always use humor. While giving my book talk, I told the story about how I once took a ballet class in Rome and the teacher pointed at me during one lesson and kept saying, “Jew! Jew!” Or so I thought. “Jew,” written as “giù” means “Down.” She was just telling me to go lower!

Don’t give up hope, no matter what. I wanted to bring a bit of light to this dark world. I wanted to share with the audience how in our region of the Galilee, Jews, Muslims, Christians and Druze work and live in peace. That is a rare, rare thing these days. It is my message of hope. I am reminded of the Midrash, “Only in darkness can we see the light.”

Give it all you’ve got. No matter what you’re doing, doing it as well as you can. I thought there were going to be five people at the talk (including Jonny and me). No matter. I still would have spoken and tried my best. I made LOTS of mistakes but I bet I gave people expressions to laugh about later. 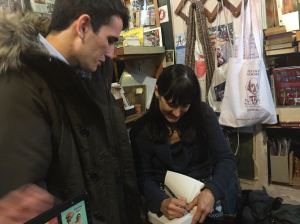 Signing after my talk

Finally, for all you writers out there, you can do marketing wherever you are. Be willing to write emails and ask people if they’d be interested in inviting you to speak. And for everyone else, the truth is that a stunt woman rode my motorcycle for me and that same stunt woman spoke in Italian for me.

When we step through our fear and into the fire, we find our stronger, braver self waiting for us on the other side.

Diana Bletter is the author of The Invisible Thread: A Portrait of Jewish American Women (with photographs by Lori Grinker) was nominated for a National Jewish Book Award. Her novel, A Remarkable Kindness, (HarperCollins) was published in 2015. She is the First Prize Winner of Moment Magazine's 2019 Fiction Contest. Her work has appeared in The New York Times, The Wall Street Journal, Commentary, tabletmag, Glamour, The Forward, The North American Review, Times of Israel, The Jerusalem Post, and many other publications. Her first book, and author of Big Up Yourself: It's About Time You Like Being You and The Mom Who Took off On Her Motorcycle. She lives in Western Galilee, Israel, with her husband and family.
View all posts by dianabletter →
This entry was posted in A Remarkable Kindness, Being a Hero In Your Life, Writers, Writing and tagged A Remarkable Kindness, book talk, Great Synagogue, marketing, Open Door Bookshop, Pope Francis, Rome. Bookmark the permalink.

6 Responses to Pope Francis in the Great Synagogue and Guess Who at the Open Door Bookshop in Rome on the Same Day.