Behind the Scenes at i24TV News: My Television Interview and a Marketing Secret 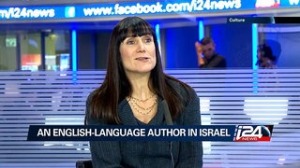 To entertain all of you folks who are battened down because of Snowzilla ’16, here’s a replay of my day at i24news TV at the Jaffa Port where I went to speak about A Remarkable Kindness. First, I got there and saw fishermen working on their nets and preparing their catch of the day. 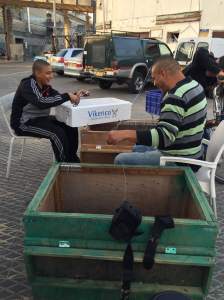 Then I went up to the studio. Little did I know, there are more than two hundred people working at i24TV, serving up news in English, French and Arabic. The offices had the hum of newsrooms, once, long ago, when people still read newspapers. (If you visit the newsroom of a newspaper these days, you will see that they’re kind of lonely places because most of the editors now work at home.) 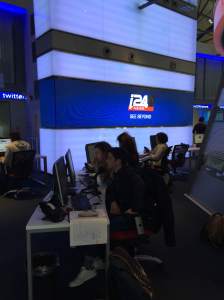 My meeting was called for 2:45 PM and at 2:47 PM I was whisked into the make-up room where Aaron applied my make-up.

From there, I went to the dressing room. Liat Lukatch is a shoe designer who also serves as dress-up, go-to gal. (Keep an eye out for li-lu shoes.) No stripes, by the way, and no white. The sweater I was wearing got the green light. 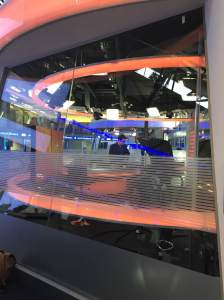 He went through a quick run-through of some of the questions he might ask. “You’ll only have six minutes and you’ll see, it will go very fast,” he warned me. Due to technical difficulties, I had to wait a few more minutes in the cafeteria that overlooks the sea. 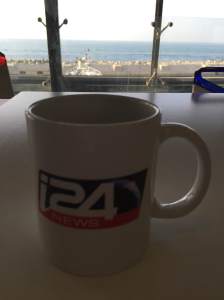 See the sea in the background?

I made sure to get all my coughs out (I’m battling a cold) and then went into the studio. I was on the air. Afterwards, I went into the editing studio; the producer is Keren, a powerhouse of a five-foot-tall young woman. 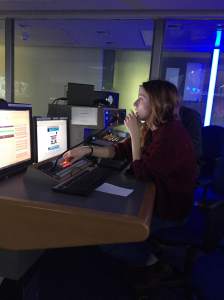 That’s Karen Snir, who has more energy than ten people put together. Those guys do the editing of each TV segment.

It was fun! Here’s the link. I learned not to tease about myself, which I do when talking about THE MOM WHO TOOK OFF ON HER MOTORCYCLE. It is said that we should not speak badly about anyone, and that includes ourselves.

Humility is something to strive for but that does not mean putting ourselves down.

The channel’s owner is Patrick Drahi, and the CEO is Frank Melloul, who previously played a critical role in establishing the French 24-hour news channel France 24. journalist Lucy Aharish is one of the leading anchors. She is Israeli, Muslim, and wonderful. You can read more about her here.

One of thegoals for the station according to Melloul is to change the international “point of view about Israel.”[2] Although the station receives no funding from the Israeli government, Melloul has said that i24 will battle prejudice against, and ignorance about Israel with “facts and diversity.”

All this shows me is that it is never too late to try new things. All the people there were half my age but I think I was having the most fun!

Diana Bletter is the author of several books, including The Invisible Thread: A Portrait of Jewish American Women (with photographs by Lori Grinker), shortlisted for a National Jewish Book Award. Her novel, A Remarkable Kindness, (HarperCollins) was published in 2015. She is the First Prize Winner of Moment Magazine's 2019 Fiction Contest. Her work has appeared in The New York Times, The Wall Street Journal, Commentary, tabletmag, Glamour, The Forward, The North American Review, Times of Israel, and is a reporter for Israel21C, and many other publications. She is author of Big Up Yourself: It's About Time You Like Being You and The Mom Who Took off On Her Motorcycle, a memoir of her 10,000-mile motorcycle trip to Alaska and back to New York. She lives in a small beach village in Western Galilee, Israel, with her husband and family. She is a member of the local hevra kadisha, the burial circle, and a Muslim-Jewish-Christian-Druze women's group in the nearby town of Akko. And, she likes snowboarding and climbing trees.
View all posts by dianabletter →
This entry was posted in A Remarkable Kindness, How to Change Your Life, publishing and tagged A Remarkable Kindness, Books, i24TV news, interview, Liat Lukatch, Lucy Aharish, Oded Grober, TV. Bookmark the permalink.

7 Responses to Behind the Scenes at i24TV News: My Television Interview and a Marketing Secret