Tool For Tuesday. Nobody Can Read Your Mind. Ask For Help. 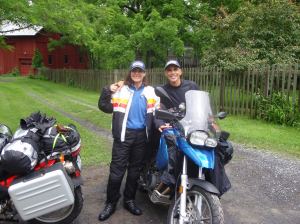 I couldn’t do it all alone–especially not 10,230 miles up to Alaska on my motorcycle. Here’s my side-kick, Tonto. I mean Jonny.

You can’t do it all yourself. Some of the best writers in the world had the best editors. (I’m thinking of Ernest Hemingway and F. Scott Fitzgerald and Thomas Wolfe who worked with Maxwell Perkins.) Writers can’t find where they ruin their own rhythm, which character belongs in a story and which one has to go, and how to polish your writing so a dull phrase shines like a diamond.

So, we have to ask for help. We can’t do it all alone. There’s something scary about asking someone to help us—first, because we’re admitting that we’re not perfectly capable of handling everything. Then there’s also the chance the person will say no to our request.

But asking is one step closer to getting. Not asking keeps us hidden in our little rooms, not venturing forth, never changing, treading water. Once you ask, you’re moving toward your goal.

Here’s an example from my own life. I was all set to self-publish The Mom Who Took Off On Her Motorcycle before I’d even read one book about self-publishing or talked to one expert. I plunged right in thinking I could do it all myself. Then Lily told me, “Whoa, cowgirl! First, talk to someone and find out how to go about it.”

I had to reach out. I researched and found Catherine Ryan Howard who helped me come up with a marketing plan. That includes blogging, twitter and—although I’m slacking at this—pinterest and tumblr.

I had to keep an open mind. Much harder than you think. We all come to everything with preconceived notions, that’s why Malcolm Gladwell’s concept of Blink is so important because we have to first clear our minds of the junk and then refill it with solid ideas. Experts have solid ideas and then they can make “snap” judgments.

I had to reach out. At first I thought I’d self-publish my book as soon as possible on March 2012. I wanted to rush and get THE MOM out for Mother’s Day. But Lily wisely pointed out that on Mother’s Day, people give mothers gifts. But The Mom Who Took Off On Her Motorcycle is a gift that a mother will want to give to herself.

So, one year after I asked for help, the book is finally, just about out. Save the launch day, February 19th!

Nobody can read my mind and I can’t read yours. You want your FREE copy of The Mom Who Took Off On Her Motorcycle in paperback? You have to ask! Enter the  contest and get someone you love a gift! (Either yourself or someone else!) Here’s all you have to do:

Tweet a link to my blog and use the hashtag #TheMomWhoTookOffOnHerMotorcycle

OR type a comment below. Even one syllable. The word “Oy” is not included, unless you’re from Finland because someone told me that “oy” means “Incorporated” in Finnish. (Is this true? Any Finnish aficionados out there?) Comment and you can win your free copy of The Mom Who Took Off On Her Motorcycle.

Of course, you can also just save the tree and buy dozens of ebooks…that’s cool, too.

Tool For Tuesday: Ask for Help. You Don’t Have to Do it All Alone.

Diana Bletter is the author of several books, including The Invisible Thread: A Portrait of Jewish American Women (with photographs by Lori Grinker), shortlisted for a National Jewish Book Award. Her novel, A Remarkable Kindness, (HarperCollins) was published in 2015. She is the First Prize Winner of Moment Magazine's 2019 Fiction Contest. Her work has appeared in The New York Times, The Wall Street Journal, Commentary, tabletmag, Glamour, The Forward, The North American Review, Times of Israel, and is a reporter for Israel21C, and many other publications. She is author of Big Up Yourself: It's About Time You Like Being You and The Mom Who Took off On Her Motorcycle, a memoir of her 10,000-mile motorcycle trip to Alaska and back to New York. She lives in a small beach village in Western Galilee, Israel, with her husband and family. She is a member of the local hevra kadisha, the burial circle, and a Muslim-Jewish-Christian-Druze women's group in the nearby town of Akko. And, she likes snowboarding and climbing trees.
View all posts by dianabletter →
This entry was posted in Lily and her stories, Relationships, Tool For Tuesday, Writers, Writing and tagged Blink, Catherine Ryan Howard, Ernest Hemingway, F. Scott Fitzgerald, Finland, Malcolm Gladwell, Maxwell Perkins, mom, Mother's Day, motherhood, motorcycle, self-printing, self-publishing, Twitter, writing. Bookmark the permalink.

10 Responses to Tool For Tuesday. Nobody Can Read Your Mind. Ask For Help.