The Mom Who Took Off On Her Motorcycle About To Take Off!

You can’t hear my heart pounding furiously nor can you see my knees shaking right before we took off for Alaska.

Here’s what I learned about self-publishing and how it connects to living our best chapter:

I could have sat and stewed about how my agent at Trident Media Group couldn’t sell The Mom Who Took Off On Her Motorcycle. I remember reading the rejection letters from editors at traditional publishing houses. One editor wrote, “We can’t take on this project but I remember after my siblings and I left home how my mother went through a similar thing…”

Another editor wrote, “Why would Diana do something so dangerous?”

They just didn’t get it.

I could have spent time wishing I could change their minds, or wishing the publishing world were different.

But instead, I started action.

At first, I thought I’d go with a small publishing company and have them handle my book. They offered to upload it onto amazon.com, to make a cover, to handle the sales and help me with my own marketing. But Bill Quain then talked some sense into me.

Bill pointed out the power of word of mouth…and good marketing…and those are things that authors have to do themselves.

My goal is still to have a book bought by a traditional publishing house—because it’s validating and very satisfying. I know, because I felt it when Jewish Publication Society took on my first book, The Invisible Thread: A Portrait of Jewish American Women–created with Lori Grinker with her stunning photographs–is now, unfortunately, out of print. (You can still find a few stray copies here.)

Meanwhile, though, I’ve learned so much. Here’s to living our best chapter. Because we don’t have to give up our dreams.

Remember: we don’t always get what we want, but we can still get almost what we want! Or something fresh and new, which opens another door.

So, you want your FREE copy of The Mom Who Took Off On Her Motorcycle in paperback? You have to ask! Enter the  contest and get someone you love a gift! (Either yourself or someone else!) Here’s all you have to do:

Tweet a link to my blog and use the hashtag #TheMomWhoTookOffOnHerMotorcycle

OR type a comment below. Even one syllable. The word “Oy” is not included, unless you’re from Finland because someone told me that “oy” means “Incorporated” in Finnish. (Is this true? Any Finnish aficionados out there?) Comment and you can win your free copy of The Mom Who Took Off On Her Motorcycle.

Of course, you can also just save the tree and buy dozens of ebooks…that’s cool, too. 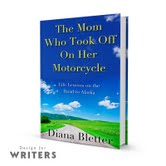 Diana Bletter is the author of The Invisible Thread: A Portrait of Jewish American Women (with photographs by Lori Grinker) was nominated for a National Jewish Book Award. Her novel, A Remarkable Kindness, (HarperCollins) was published in 2015. She is the First Prize Winner of Moment Magazine's 2019 Fiction Contest. Her work has appeared in The New York Times, The Wall Street Journal, Commentary, tabletmag, Glamour, The Forward, The North American Review, Times of Israel, The Jerusalem Post, and many other publications. Her first book, and author of Big Up Yourself: It's About Time You Like Being You and The Mom Who Took off On Her Motorcycle. She lives in Western Galilee, Israel, with her husband and family.
View all posts by dianabletter →
This entry was posted in Acceptance, self-printing, Uncategorized, Writers, Writing and tagged Amazon Kindle, Facebook features, Finland, Jewish Publication Society, Lori Grinker, Mom Who Took Off On Her Motorcycle, publish, self publish, The Invisible Thread, Twitter. Bookmark the permalink.

3 Responses to The Mom Who Took Off On Her Motorcycle About To Take Off!