You Have To Make It Happen For Yourself. (In All Areas of Your Life and not just Writing.)

More on self-publishing since I’m getting closer to launching THE MOM WHO TOOK OFF ON HER MOTORCYCLE.

This update on  the DO’s and DON’T’s of self-publishing is from Anne Kleinberg, author of Menopause in Manhattan (How’s that for a title?) who spoke at the Jerusalem Book Fair on February 11 in an event sponsored by Ang-Lit. Press. They are the independent and intrepid publishers who just came out with Love In Israel: 65 Short Love Stories, Ang-Lit. Press’s fourth anthology. (You can buy the wonderful collection here edited by Shelley Goldman.) Anne about what she did to make her book hit #7 of all ebooks sold on barnesandnoble.com. Anne is a six-time “traditionally” published cookbook author, and she  self-published her first novel. Here are some of Anne’s rules:

Edit. “That’s the first rule. Edit and edit some more. Menopause in Manhattan took me three years and many rewrites. I worked with a friend who is an editor and then sent the book to six more friends and another copy editor to find out what works and what doesn’t. Editing will make or break a book.”

Website: “Get it going. I don’t add to mine much but you should.”

Decision: “I had no intention of publishing a novel or even writing one until a friend said, ‘How about a murder mystery with a cook?’ That got me started. I sent the novel out to two literary agents, I got two rejection letters and I didn’t want to wait around much longer so I decided to publish the novel myself.”

Cover: “Get a great cover. I was lucky. An artist whom I love made the cover for me.” 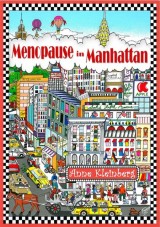 Cover of Menopause in Manhattan

Marketing: “That is the hardest thing. Tap into forums and book clubs. Drop off books somewhere. Just because you’ve produced a book doesn’t make you prom queen.”

Motto: “You have to make it happen for yourself.”

Anne’s words ring true for every aspect of our lives. We have to motivate ourselves. We can’t wait around for someone else to do it for us. We have to make it happen.

Check out Anne’s website and her cookbooks–everything from sandwiches to cakes and pomegranates here.

And…Hit LIKE on http://www.facebook.com/DianaBletter here to win a free copy of THE MOM WHO TOOK OFF ON HER MOTORCYCLE.

Diana Bletter is a writer living in Western Galilee. Her work has appeared in The New York Times, The Wall Street Journal, Commentary, tabletmag, Glamour, The Forward, The North American Review, Times of Israel, and many other publications. Her first book, The Invisible Thread: A Portrait of Jewish American Women (with photographs by Lori Grinker) was nominated for a National Jewish Book Award. Her novel, A Remarkable Kindness, (HarperCollins) was published in 2015. She is the First Prize Winner of Family Circle Magazine's 2011 Fiction Contest and author of Big Up Yourself: It's About Time You Like Being You.
View all posts by dianabletter →
This entry was posted in Decisions, self-printing, Writers, Writing and tagged Business, copy edit, editing, Literary agent, Manhattan, Menopause, publish, Publishing and Printing, self publish, self-printing, shopping, writing. Bookmark the permalink.

1 Response to You Have To Make It Happen For Yourself. (In All Areas of Your Life and not just Writing.)